See what our customers have to say!

In my mystery duo package I received a Nerds Floam and a Strawberry Acai Refresher, I really like both of them. The strawberry one smells like strawberry candies which I really like, and the nerds one smells just like fruit punch. I prefer the nerd floam one because of the fun texture and bubbles pops, but both are good slimes. I would order the mystery duo again 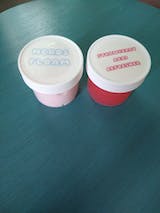 I received this slime in my mystery duo and I really like it. It smells so good, makes me think of strawberry candies. I'm not usually a fan of clear slimes, but this one is fun to play with

I received this slime in the mystery duo and it's my favorite so far from this store (I've received 4 different slimes). It smells exactly like fruit punch, the texture is great and I love the bubble pops. Would definitely get this one in a bigger size

I got this slime free with my order and the texture is great. Very creamy and fun to play with. The only downside is for me the baby powder scent is intense. It gave me a headache and when I play with it I can like taste/feel it in the back of my throat. It's a great slime otherwise and I would love to play with it but the scent being so strong makes it kinda impossible for me to. My daughter isn't bothered by the smell though

I've been wanting this slime for a long while now, I've watched so many reviews and it looked amazing. But I had the same problem as some of the reviews here. It wasn't glossy at all, wouldn't make any clicky noises, smelled strongly of chemicals, was tough. I really can't play with it. It's nothing at all like what I expected and I'm so sad. The texture and the scent are nothing like what is described. Really wanted the advertised slime. I see really good pictures and videos of this slime in the 5 star reviews but my slime is nothing like that. Maybe I got an old one. It's interesting to me that when I put a one or two star review my rating is listed as hidden from the website, but when I change it to three stars now it's visible to buyers. 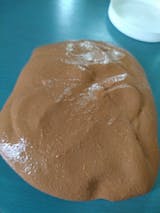